Australia’s official unemployment rate has dropped to 3.5 per cent, with an estimated 88,400 jobs added to the economy last month. This is the lowest official jobless rate recorded since August 1974. Job vacancies remain high, with almost one available position for every officially unemployed person. Therefore, many businesses are reporting difficulties in recruiting qualified staff.

In further positive news for the Australian economy, the fall in unemployment occurred despite another increase in the number of people looking for work, with the participation rate rising to a record high of 66.8 per cent.

Big Wave Digital is seeing this buoyancy as well, so many jobs in digital data and tech to fill. The market is at a record low in terms of supply of quality candidates. Despite the strength of the booming jobs market (nationally there is now almost one job for every jobseeker, according to the ABS, up from a ratio 3:1 pre pandemic), this market tightness is an issue as well as an opportunity. “In a normal cycle, the number of unemployed per vacancy ranges from three to five – one is an unheard-of level of labour market tightness,” Mr Smirk said. Australian Chamber of Commerce and Industry chief executive Andrew McKellar said the nation’s skills shortage had “gone from bad to worse”.

As a result, there are many consequences in candidates’ willingness to accept a job, that often depends on:

As a pianist who is simultaneously pursuing a bachelor’s degree in economics, I fully support this study and am willing to share my personal experience.

In a society that still operates behind the facades of images and social trends, where our reality is filtered, we sometimes feel “forced” to follow the regular path in our career, because anything out of the ordinary may be ridiculed by many people.

At the end of the day, I realized that it is all about yourself and not about others, i.e. “What do I want to do with my career in life?”.

Sometimes market conditions may affect the decision to go for a well-paid job instead of following your dream career (which could be uncertain). In some eras, market dynamics may dictate that this is the best option because your priority is to survive, even if not in the most pleasant way. Indeed, according to Abraham Maslow “Hierarchy of Needs”, you need to fulfill most basic needs before moving on to more advanced needs.At this point, I think it is important to explain the concept of self-actualization that was brought into the mainstream by Maslow when he introduced his “Hierarchy of Needs.” Maslow discussed self-actualization by stating, “What a man can be, he must be. This need we may call self-actualization ”. Maslow described the top of his hierarchy of needs by remarking that: “a musician must make music, an artist must paint, a poet must write, if he is to be ultimately happy”. 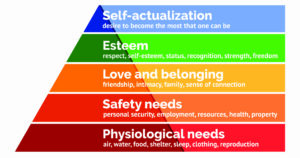 Once we realize that self-actualization is not about making the most money or achieving the highest status, that it is a desirable state achieved through reaching one’s full personal potential, we open the door of possibility in our own lives. Self-actualization is about achieving your dreams, which means that it is within your grasp–whether that means becoming a painter, a politician, a philosopher, a teacher, or anything else that sparks your passion.

So, stay aware of the current market dynamics and catch the wave to build the career you have always dreamed of!

How can we help you build a brilliant team or get that brilliant job?

Let us help you build a Brilliant team in Digital, Data, and Technology.